The Comic That Changed Everything – Part Four

In our last episode…

In addition to all those other thrilling attributes of G.I. Joe issue #90, there was also this: 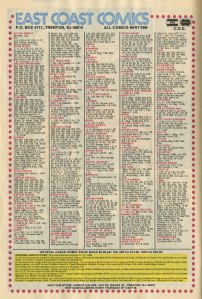 A full-page ad for a mail order comics retailer.  My brother and I were a little confused – comics by mail?  Or anything by mail, really.  How did we know this operation was trustworthy?  So, what, we just send them money and they send us comics?  What if they ran off with the money?  My 11-year old brain tried to reconcile the risks.  I had subscribed to a magazine or two, but that was direct.  Mad Magazine sent Mad Magazine.  (Not really, but play along.)  This third-party could be anyone.  My mom, who had done her fair share of mail order shopping (and whose father had owned a department store), didn’t see a problem.  My brother and I would give her our money, and she would write a check or provide her credit card information with our order.  But again, what if our letter was intercepted?  Or what was stopping this company from racking up excess charges on Mom’s Mastercard?  It’s funny to me that compared to today’s world of internet banking, online credit card purchases, and PayPal, I was so hostile to this by-then already old-fashioned mail order concept.  It seemed like a step was missing, like they should tell us they’d received our order, or we should call and confirm our wants were in stock.

Also, there was no individual’s name on the ad.  And no phone number.  Just the company moniker and a PO Box.  I only ever had positive experiences with East Coast Comics in the ten or so years I ordered from them, but at the start it looked entirely shifty.  I mean, Trenton, New Jersey?  Come on!

The first thing Kevin and I noticed was that the prices were low for the most recent thirty issues.  But there was much that didn’t make sense.  What was “Tales of G.I. Joe”?  What was “G.I. Joe Digest”?  What were “2nd prints?”  What were “alternates,” and why did we need to list them?  Instead we focused on what we did know, that we couldn’t get all of the regular back issues, so we’d have to pick and choose.  We retrieved Yearbooks #3 and #4.  What I didn’t mention earlier was that those Yearbooks had cover galleries showing thumbnails of a year’s worth of the monthly G.I. Joe.  At the time we first read the Yearbooks, those galleries didn’t mean much, but now they offered a roadmap.  We picked the issues with the most compelling covers, the ones with favorite characters or dire situations, and added on the one cited in issue #90’s footnote.  All tallied it was 22 comics for $11.  I typed a letter in Word Perfect, but I didn’t know how to frame the order, so I awkwardly wrote “Dear East Coast Comics, I would like to ask you to send me the following issues.”

I had sent away for a few premiums in my young life – t-shirts and pencils from cereal boxes, G.I. Joe toys from Hasbro Direct Mail, and the aforementioned subscription to Mad.  And everything took 4-6 weeks.  It was as if all the mail order retailers, warehouse workers, and courier and postal delivery people of America had united to make the nation’s kids wait in agony.  No matter the distance or the complexity, no matter the item, you wouldn’t see it for at least a month.  So after Mom fired off our order to East Coast Comics (from the office, by phone, with credit card – probably early in the morning before anyone else arrived, when she was most productive), I put it out of my mind.  It was summer vacation!  That meant bike rides and Slurpees and gameshows on TV.

What was it?  Tune in next week to find out!

One response to “The Comic That Changed Everything – Part Four”