Welcome to the blog.  For ten years I’ve been quietly researching and writing the definitive “art of” and “making of” book on G.I. Joe: A Real American Hero.  I didn’t want to announce it because it was in process, and I didn’t want to act prematurely.  It is still in process, but now it’s time to start building up an audience and get people interested.  So a little background is in order.

My brother and I received our first coffee table book as a Christmas present in 1991.  This was Abrams’ “Marvel: Five Fabulous Decades,” written by Les Daniels.  If you can take yourself back to a time before there were TVs for every airplane seat, movies on your phone, and instant video communication around the world, this was a big deal.  It was big, colorful, and bursting with information.  It was heavy.  I was just a kid, so sitting with the book was a physical investment.  Daniels broke down the history, characters, and personalities of Marvel Comics in an accessible way, and besides the text and the photographs, the book also reprinted four comics stories.  We were predisposed to Marvel, as we were already reading several monthlies from The House of Ideas before we met our first DC one.

Coffee table books had been on my mind even before then.  My father was (and is) a book collector, and our whole family read.  At the top of our staircase was my father’s collection of war and history paperbacks and aviation journals.  In the living room were two imposing bookshelves of his non-fiction and historical hardbacks.  On my mom’s night stand were her current run of fiction bestsellers, paperbacks that leaned towards drama, suspense, and a bit of romance.  In the guest room was the 1977 Encyclopedia Britannica.  And most importantly, on the coffee table in our family room, the room where we spent most of our time, were car and airplane magazines, and at all times, one coffee table book.  I never looked at them because I wasn’t interested in Vietnam, Korea, or WWII.  But the size and beauty of these tomes was not lost on me.

After Kevin (my brother) and I got that first book, one or two followed every year for Christmas and birthdays.  Daniels’ analogous history for DC Comics, the Reeves-Stevens’ “The Art of Star Trek.”  And on.

Kevin and I were playing with G.I. Joe figures and vehicles, watching the weekday cartoon, and a little later, reading the monthly comic book.  We were less involved with G.I. Joe in September 1992 when Warner Bros. and FOX teamed up for the eye-catching “Batman: The Animated Series.”  This show looked like nothing else on television – and the look is often all that gets recognition – but the writing and pacing were novel as well.  As I moved from middle school to high school, and then to college, my toy-playing turned into toy collecting.  And it was in college that a pair of books were published that would change everything:  John Michlig’s “GI Joe: The Complete Story of America’s Favorite Man of Action,” and Paul Dini and Chip Kidd’s “Batman Animated.”

Michlig’s is the definitive history of the 1960s and ’70 GI Joe action figures, the 12-inch ones that later made famous the term “Kung Fu Grip.”  These figures meant nothing to me, but Michlig’s book made me a fan.  With first-hand accounts and documents, eye-catching photos of production art and sculpts, plus historical context, this book makes the 12-inch Joe come alive.  And more importantly, makes me appreciate what went into creating an entirely new toy category – the action figure.  The writing is taut, and Michlig’s enthusiasm shows through without feeling cloying.

The Dini/Kidd book is striking for its design.  This could have happened even with a less aggressively laid out book since the source material is so visually novel, but “Batman: Animated” becomes its own art object for its alternating black text on white and white text on black, its arrangement of pictures and text in changing columns and grids, and the photography of Geoff Spear, who makes even a tame Kenner action figure feel like a monumental sculpture.  The only drawback is that the book leans too heavily on one artist who contributed to the TV series, but I overlook that because all the included drawings, paintings, and ephemera are so strong.

So there I was in the winter of 2000-2001, catching up on the reading for pleasure I hadn’t done in college.  I plowed through Michlig and Kidd, and thinking back to the other coffee table art books on my bookshelves still in Maryland, wondered when either of these authors might make such a book on the 1980s and ‘90s G.I. Joe.  My G.I. Joe.

But these men were a generation removed.  They wouldn’t write that book because this G.I. Joe wasn’t theirs. 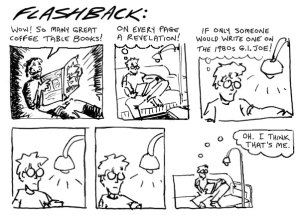 And so I realized that I would have to.  Fortunately, I already had, in a fashion.  More on that next time.