In our last episode, Tim secured an interview with Larry Hama and took a train to New York… 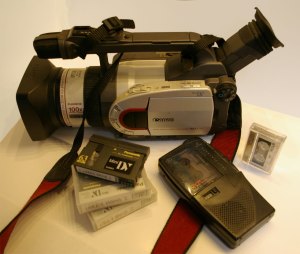 In my backpack were a marble journal for taking notes, a video camera for recording audio (I’d keep the lens cap on), and a back-up microcassette recorder.  Even though we hadn’t agreed on an exact time, I worried that I had no time for lunch, so I called from a payphone at Penn Station and immediately hopped a subway.  When I got to Hama’s place, I was struck by how open it was, a two floor studio apartment with lots of light and a high ceiling.  My experiences with New York living spaces were all dark and narrow — whatever college dorms and apartments friend (and future book editor) Nick Nadel had been squeezed into.  Years later Larry would tell me about how his building used to have a view all the way to New Jersey, but by the time I got there in 2001, the whole street was built up with shops and tall apartment buildings.

I was also struck by the decorations.  On the left wall was a Gary Hallgren post-modern painting of Dick Tracy.  Across from it was another Halgren of Blondie, Dagwood, and Krazy Kat.  Next to the kitchen was a 1976 ink drawing of Bilbo Baggins and 12 dwarves by a young Michael Golden.  Up the steps to a narrow passageway filled with books and packaged G.I. Joe toys (and Golden’s original cover artwork to The ‘Nam #12) was a tiny room – Hama’s office.  Art, photos, memos, and an old paycheck covered the right wall.  Straight ahead was a computer, to the left were windows and an A/C unit.  A second PC, papers and books, and a flight simulator joystick covered the spare table, smaller than a chess board.  The whole space must have been six feet by fifteen feet, a sliver of a room you’d give to your drunk friend who’s crashing after the party ends.  A glorified closet, and yet so out of the way and with such an interesting view of the street it made perfect sense as a writer’s room.  And this is where scripts and cover layouts for my favorite comic books had been typed and drawn.

I drew this after another visit years later. The space hadn’t changed.

Leaning against the left wall and below the windows was Hama’s guitar.  (Years later on a subsequent visit there was a guitar and a metal 1:1 scale working model of a machine gun, which made me think of the Warren Ellis quote “Larry Hama, perhaps unsurprisingly, knows a lot of people with guns, and so has marvelous stories to tell about stone lunatics with too much artillery who also happen to be comic artists.”)  (And it’s telling that the one time Larry appeared on the cover to a Marvel comic book, he’s holding a machine gun.)

There was just enough space for the two of us to sit down, me in the spare seat.  I turned on my gear, and started asking questions.  Mel, Larry’s pug, joined us halfway through.  I will never stop smiling at the seeming incongruity of it:  The famous Larry Hama, who had written a light “war” comic for 12 years, and who guided Wolverine’s solo adventures through a swath of Yakuza and evil mutants for another seven, who bridged the ninja craze at Marvel Comics after Frank Miller left Daredevil for DC, thoughtfully and quietly reminiscing with a pug in his lap.  What did I expect?  A chat at a shooting range?  With no plan besides “get the interview,” I didn’t know what to expect, but it turns out that the man I met was the real Larry Hama: a reserved and modest guy, a thoughtful and learned reader and writer.

In some ways, this was the best interview to start with, and the worst.

Why?  Find out next week…

Filed under Book Behind the Scenes, Writing Process

Tagged as Behind the scenes, G.I. Joe interviews, Larry Hama