Andrei Koribanics freelanced for Hasbro in the mid-1980s.  Besides today’s Borer art, I’ve also come across a figure concept by him (that may end up in Chapter 14 of my book) and the presentation painting of Sgt. Slaughter’s Renegades (in Chapter 6).  Leaky Suit Brigade has a tiny interview with Koribanics, and should have a longer one up at some point. 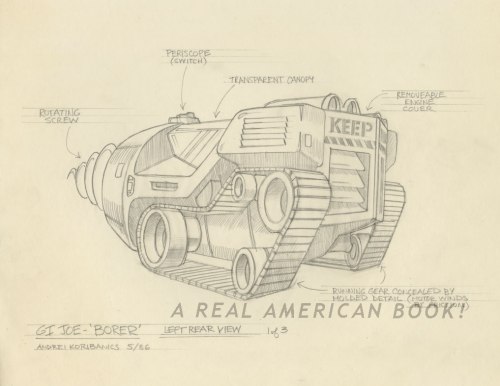 For those of you who note Cobra’s heavy use of drill tanks in the weekday cartoon, it’s interesting to note that toy-wise, the Joe team may have wound up with a fleet of personal ones.  I can just imagine the ads — this toy popping through a wall of mulch laid in a brick pattern, ’88 Joes stopping Destro’s Iron Grenadiers from some nefarious subterranean plot. 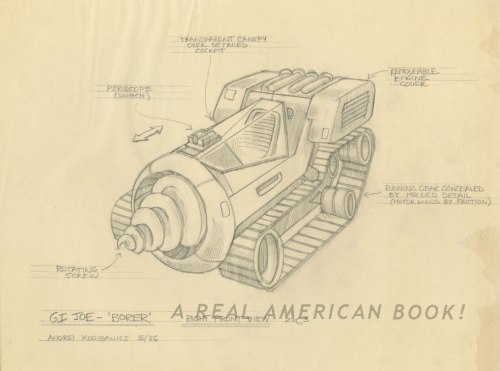 Based on the scale of the cockpit and the figure in it, this unproduced vehicle would have been a little under $10, I think.  What I don’t know, however, is how much input other designers may have had.  Koribanics might have concepted this all by himself and drawn this with little outside input, or the idea (or a sketch) may have started under someone else’s pencil.  Regardless, this are nice illustrations of what might have been.

And what might R&D and Marketing have come up with for a name?  What acronym says little, one-man drill tank?  DART, for Drill Attack Retrievable Tank?  PBD, for Personal Borer Drill? What would you name this vehicle had it made it to market?