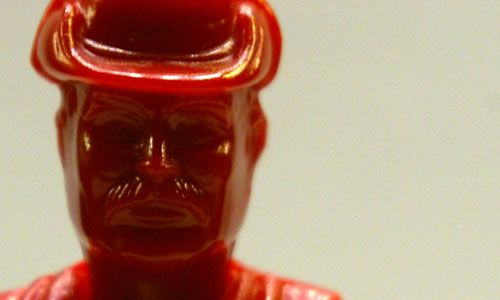 While I was glad to see my favorite Joe Marine, the ’86 Leatherneck, get an update in ’93, I wasn’t thrilled by the color scheme.  It’s interesting, but it doesn’t say “Marine” to me.  But it’s unfair of me to want that since this update isn’t a Marine, or just a Marine, but an Infantry/Training Specialist and Marine Drill Sergeant.  And maybe such a person would wear burnt ochre, yellow, and teal.  So while the G.I. Joe line was moving back towards realism in the Battle Corps subset in ’93 and ’94, that wasn’t a guarantee that Leatherneck, one of the more realistic-looking figures of the ’80s, was going to stay realistic.  To be clear, though, I do like the design, just not the color choices.  My first reactions are the words “giraffe” and “banana,” and I’d only want to have that for some fanciful Jungle-Viper.

Which is why I was so struck by this test shot.

Here’s the same view, with a little more front lighting for a slightly different look.

Test shots are made with whatever color plastic is already queued in the assembly line, so a test figure doesn’t look (color-wise) like the final will.  He may not even be symmetrical.  One leg may be blue and the other may be black.  But I’ve never seen a test shot in all red.  Or all red with a little pink-that’s-close-to-red. 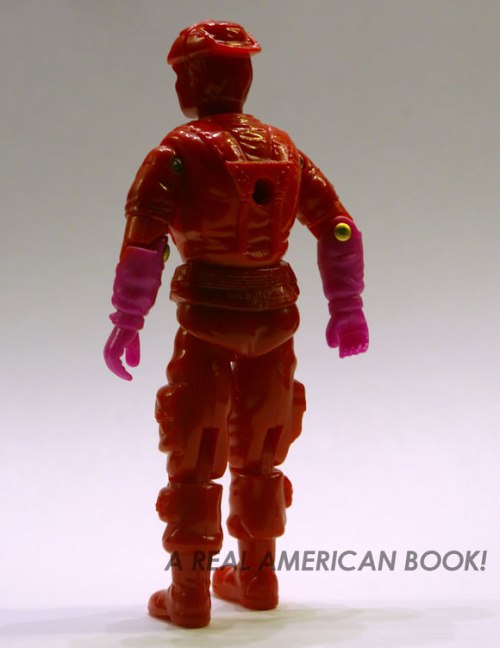 Something about this says “villain” and “awesome” to me.  And “blood,” so while I don’t collect test shots (this is my first), I definitely wanted him, and out on display.  Specifically creeping up on one of the other Joes who lives out on display in my home.

What’s also so striking about test shots is that because they are unpainted, the sculpted details from the mold are extra crisp.  So I’m starting to get why some Joe collectors go Leatherneck-pants-yellow bananas for test shots.

One response to “1993 Leatherneck test shot”