Besides teaching animation and writing this book on G.I. Joe, I also own a comic book store.  G.I. Joe isn’t a big seller, to my dismay.  I enjoy giving away comics on Free Comic Book Day, and to neighbor-kids from my home on Halloween.  It was just a matter of time before these two things came together, plus I wanted an excuse to order an unreasonable quantity of the special anniversary.  Say, ten times our normal order.  (And not for the variant covers, as those are a bogus business model.)

It took eleven days to give away 200 copies.  No “Buy Something, Get G.I. Joe #200 Free.”  Just free.  Anyone could walk in and ask, although I don’t think that happened, despite our promoting this with fliers, our weekly e-mail, our Facebook page, and some larger fliers in the store windows.

But for days, everyone who passed by the register was asked “Would you like a free copy of G.I. Joe 200?”  Most people were pleasantly surprised.  A few remarked they had read the comic years ago.  Some weren’t fans, but took it anyway.  And several people, reasonably, said no thank you.  I didn’t think this would motivate sales of issue #201 (and a month out, I’m proven correct), or even collected editions from earlier in the series (we have them all in stock).  That might surprise you, but by now, it doesn’t surprise me. 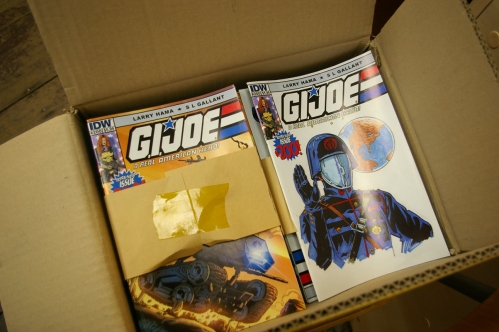 Free Comic Book Day offers an example.  Walk-ins on that holiday tend not to return to pick up any specific series that was previewed on FCBD.  Free Comic Book Day is less about turning on customers to any one particular monthly series, and more about getting people into the store to buy things — anything.  Like how Free Cone Day at Ben and Jerry’s doesn’t turn you and your pals into weekly ice cream junkies.  Or a little like how Black Friday isn’t about Christmas shopping, it’s about deals and regular shopping.  Some FCBD visitors are weekly regulars, others who only visit twice a year.  While they’re in getting free comics, customers tend to pick up a few singles or graphic novels.  I could go on at length about what sells and why at American comic book shops in general, and at Hub Comics specifically.  Maybe one day I will.

But I’ll wrap up this topic by stating it was fun to tell IDW we were doing this.  And that several dozen people, both on the internet who heard about it but weren’t local, and many who were, enjoyed the treat.  I enjoyed giving away something special, something G.I. Joe-related.  And I very much enjoyed the issue itself.  I’m not sure when we’ll next do a big G.I. Joe event — we’ve already had a Larry Hama signing and now this.  Maybe when I’m done with my book…

Leave a Reply to A Real American Book! Cancel reply