Dusty was a great character. He gets a two-parter in the animated series nearly to himself, the dramatic “The Traitor,” written by Buzz Dixon. Issue #13 of Special Missions is another great showcase. His action figure is unusual in that the face is obscured by tiger camo, and his costume is partially soft goods — actual cloth. The 1980s were good to Dusty. He even got a new color scheme when his action figure was re-released in green as part of Tiger Force. The ’90s weren’t so good to Dusty. In animation, voice actor Neil Ross was no longer at the mic, lending a thick twang to the character. Now it was Maurice LaMarche, who would go on to be a favorite of mine, but though he attempted a southern accent, the DiC version of the Joe’s desert warrior just didn’t sound adequate.

So by 1991, I lost interest in Dusty. This was especially down to the character’s new duds. Control art by Kurt Groen. 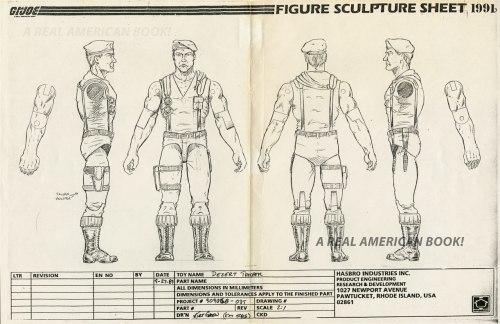 It’s a fine looking design, but I’d always wanted a similar vocabulary to carry over from version to version as Joes got remade. ’85 Dusty had that signature hat and neck guard, and baggy clothes. This new one was in form-fitting pants and showed off a lot of skin with that tank top. He’d never worn a beret, so this felt like Flint or Dial-Tone had fallen into a vat of yellow paint. In terms of fashion, I don’t love V-necks. Plus that V-neck skintone paint looks more like the clothing color. And while I loved the Joe pets, again, Dusty hadn’t shown an inclination to animal companionship, so that coyote “Sandstorm” was arbitrary. (An issue or episode wherein the pair meet for the first time would have gone a long way to alleviate this.) Overall ’91 Dusty is under-decorated and under-detailed compared to his earlier appearance.

Again, it’s a fine looking toy, and a worthy addition to Real American Hero, but I have no emotional attachment to this incarnation.

Here’s a nice pic taken by one Mr. Tim Meece, with permission from YoJoe.com. 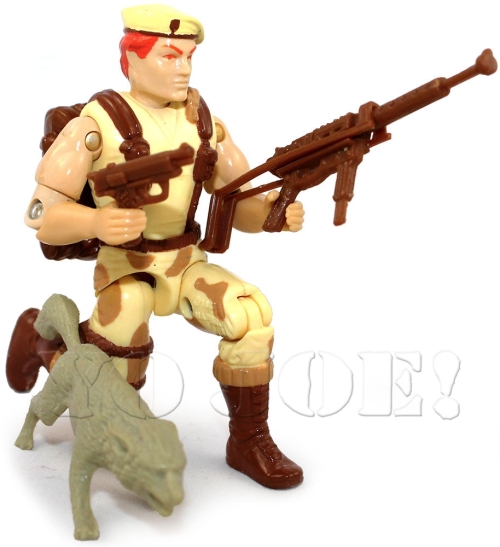