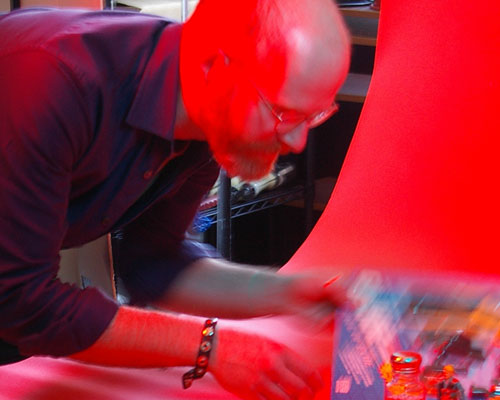 Two weeks back I spent a day and a half at Glad Works so A Real American Book! photographer Tim Marshall could shoot new images for Chapters 12, 18, and 19.

Photoshoots are particularly exciting for me. The day-in and day-out process of writing this book isn’t dramatic. Some days I open up a Word draft and re-read half a chapter to refresh where I was before things got busy, and spend 20 or 200 minutes reworking a paragraph. Other days I’m googling for people, newspaper articles, and images, cross-referencing the year that someone did something. Some days I’m on the phone, asking questions and recording the interview. And still other days editor Nick Nadel and I are on the phone, him suggesting style changes and asking for factual clarifications after I’ve turned in a chapter draft. These are all fun. The non-book kind of day is at my shop or at school, moving boxes or showing films to students, thinking “I should open up a chapter when I get home and work on the book,” but then it’s time to make dinner or take a cat to the vet or get the oil changed or plan for more boxes at the shop or films at school. There are also days where I scan or photocopy G.I. Joe assets, but there’s been less of that these last few years.

Three kinds of days revolve around photography: 1) Working on an image index for designer Liz Souza. That means comparing a print-out of a finished chapter text with all the assets on my hard drive and loosely typing up a list of what images should go roughly with what paragraphs. Then Liz works her magic and few months later I get to 2) look over a designed chapter pdf. Some pop immediately as successful and done, others I need to live with for a few days, and add, remove, or move images. And then there’s the photoshoot. That’s “3).”

Glad Works has a dedicated studio room for photography. Shelves filled with objects and junk offer hues, textures, and props for backgrounds. Saw horses and a wooden platform make for a moveable table. Lights on stands provide illumination, and gels provide color. The first photoshoot, way back in 2008, was a kind of sketch. I had a sense of what I wanted, but there wasn’t much concrete connection between what was in that first chapter and what we shot, it was more “let’s shoot some loose ’82 figures and see what happens.” The results were helpful for the first chapters that Liz designed, but as the whole book and the feel of each chapter has developed, it appears that few if any of these earliest photos will make the final cut. That’s fine. Later and more recent shoots have been closely linked to content in a chapter — This chapter references the Coleco Rambo toys, so let’s take a picture of Coleco’s Rambo.

This was actually a two-day shoot. We did the hard stuff the first day, and then I went back the next (a Friday, hence the “F”s above) and we finished. The studio is an hour-plus drive from my house, so one of these days is exhilarating and tiring. A second day is less of one and more of the other. But a session at Glad Works yields concrete progress, good for the book and great for my state of mind.

Here’s photographer Tim Marshall and extra-pair-of-hands Liz as we set up for a Hall of Fame picture. This is before Marshall devised the lighting, so this bit of behind-the-scenes “magic” isn’t spoiling what the final image will look like. 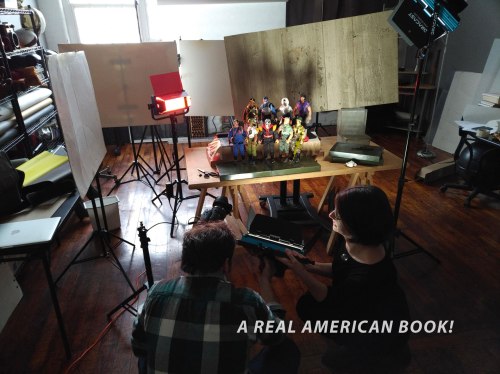 A week and a half later, Marshall sent me the contact sheet. Here it is very small so that I’m not spoiling anything:

Two of these photos are easy to incorporate. They’re replacements for placeholder images on mint-in-package toys I pulled off ebay. At some point I’d track down my own examples of these toys, we’d shoot them, and Liz would pop them in. The rest of these are for chapters I’ve been recently working on, and mean Liz can move ahead with almost-final design, for which I’ve been most anxious! I anticipate needing another two photoshoots in 2019.

Filed under Book Behind the Scenes, Photography