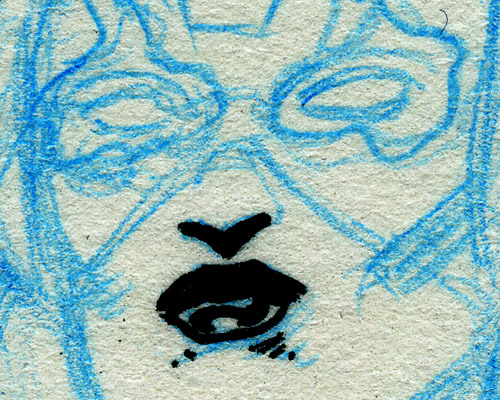 Around 1994, Kurt Groen was sketching a bunch of super-heroes for possible inclusion in the G.I. Joe line.

These X-Soldiers were clearly inspired by the “hot” heroes of Marvel and Image, with X-Men, Spawn, and Youngblood selling hundreds of thousands (and occasionally millions) of copies per issue, and with FOX’s mega-hit X-Men cartoon airing on Saturday mornings. Such a take was foreign to A Real American Hero, but felt right at home with the vigilantes, mutants, and interdimensional teleporters of the early-1990s super-hero boom.

Groen drew up seven characters as internal presentation pieces that made it to color, but a few didn’t make it that far, like Mestophoni:

The original art is blue pencil lightly applied to white paper, and hard to decipher. But before I up the contrast in Photoshop, this transcript of those super-stats will let you know what you’re getting into:

She recalls X-Men’s Spiral, who chased Longshot from the Mojoverse to Earth, but also looks like a lot of comic book characters from the ’80s and ’90s — swashbuckler knee-high boots, eye mask, plunging V-neck, horns, sword.

The G.I. Joe toy line was canceled and the X-Soldiers were scrapped.