Behind the scenes of G.I. Joe – Groen X-Soldier

It’s Monday or Tuesday, which means another preview of rare, lost, and never-seen art from the making of G.I. Joe 1980-2000 to whet your appetites for my book.  Today’s image is a 1994 Kurt Groen pencil and marker drawing of a proposed X-Soldier. 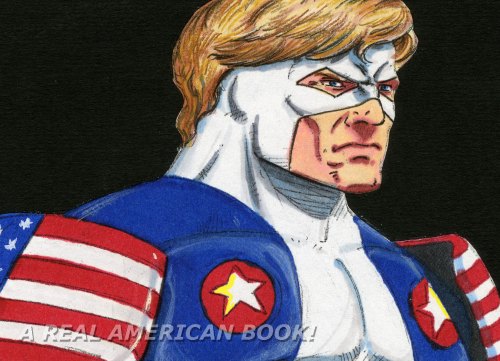 Very little is publicly known about X-Soldiers.  It’s telling that they are neither mentioned nor pictured at the encyclopedic yojoe.com.  I don’t say that as a swipe against the site as I love it and have referred to it weekly for the past six years of writing my book.  Just that the line, unlike many other unproduced Joes, hasn’t been widely seen or discussed.  Google searches yield almost nothing.

But print offers a succinct explanation: According to G. Wayne Miller’s Toy Wars, “[Kirk] Bozigian’s biggest setback had been X-Soldiers.  Shown prototypes, boys in focus groups had been disinterested.  The concept needed work, and the line was unlikely to reach market before the summer of 1996, if then.” (pg 185)

A line of traditional super-heroes that would battle for and with G.I. Joe, and each figure would have had an action feature.  Seven X-Soldier characters are known to exist as color marker illustrations.

5 responses to “Behind the scenes of G.I. Joe – Groen X-Soldier”