Behind the scenes of G.I. Joe – PSA #10 Storyboard 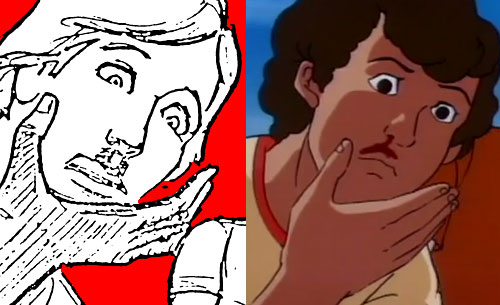 Endorsed by the National Child Safety Council, a non-profit founded in 1955, the now infamous G.I. Joe public service announcements (PSAs) were created to elevate the series’ profile as an agent for pro-social values and to ward off criticism from parents’ groups that the G.I. Joe cartoon was a) violent and b) a half-hour toy commercial.  35 PSAs were created in all, with topics ranging from not giving in to peer pressure, to nutrition, and to owning up to one’s own mistakes.  The format was likely borrowed from Filmation’s 1983 series He-Man and the Masters of the Universe.  In that show, at episode’s end a marquee character would directly address the audience and refer to an incident from the proceeding episode.  The Joe ones were different, working both in “regular” continuity wherein the Joes spoke to kids in-scene, and not the television audience, but also a kind of parallel universe where the Joes were always near suburban danger and utterly lacking in top secret status.

For Footloose’s rapid-fire instructions, PSA #10 is one of my favorites — there’s no way I’d remember what to do in my own soccer crisis unless I had a transcript handy.  Also, this is perhaps one of three incidents in all of G.I. Joe animation 1983 to 2000 where the animators showed blood.  I appreciate the added dash of seriousness.

Here’s the storyboard for PSA #10.  I should know who drew this, but don’t.  I’ll check my sources and update this post when I can.

For those unfamiliar with storyboard formatting, here are a few items of note:

-The second panel — the stretched out one — represents a camera move.

-The numbers under the panels represent length of footage in feet and frames.  Old school film editing (and animating) was measured not in seconds/frames, but in feet/frames, with a foot being the physical length of 16 frames of film, and a frame lasting 1/24th of a second.  So where it says “SLUGGED BOARD” at the top left of page one, the board artist has timed out to the audio track each shot’s duration, or is providing a time table for the animators to show how long each shot should last.

As a special thank you, I’d like to acknowlege YouTube user PSAGIJoe, who has uploaded the original, non-satirized PSAs.  You can find them here.

One response to “Behind the scenes of G.I. Joe – PSA #10 Storyboard”