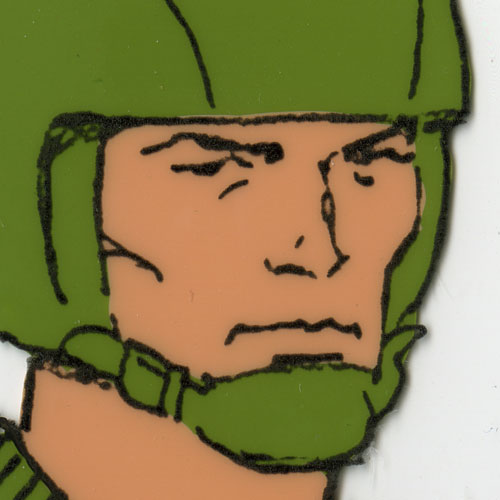 I don’t recall when this generic trooper (version two) appeared within the 1984 G.I. Joe animated miniseries, “The Revenge of Cobra,” (feel free to chime in in the comments), but here’s a little art of him.  (Version one, not pictured in this post, is sans camo.)  First up is a black and white photocopy of the model sheet, with cel paint color codes written in pencil. 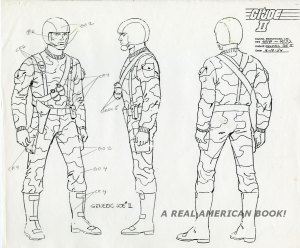 And here’s the color model sheet — cel vinyl (like acrylic paint) on the back of an animation cel.  Two or three of these were painted for every single character that appeared (standard for animation, not just the G.I. Joe production).  One or two stayed in the States, and one or two went overseas with all the scripts, storyboards, and background keys to the animation studio that would produce the bulk of the show, in this case Toei in Japan.

This art is likely Russ Heath, since he’s the main designer credited on “Revenge,” but I should point out that eight other artists appear in the end credits of these five episodes.  They did costume changes, props, and lesser background characters so there’s a chance one of them took a Heath drawing of Generic Joe version one and added a few details.

I don’t know if the term “greenshirts” came about in early Joe fandom, or in 2000 when Devil’s Due Press published its G.I. Joe comic book and canonized the term, but I’ve never liked the word (even though it’s wonderfully accurate) because it represents the animation’s misunderstanding of the Joe concept from almost year one.  With generic soldiers running around in the background of every episode, G.I. Joe becomes a stand-in for the regular, larger armed forces, rather than Delta Force, (what it’s actually a stand-in for), akin to the A-Team or the Mission: Impossible folks.  It’s not hundreds of men and women, it’s five or ten or 20 on smaller missions.

But seriously, I don’t recall when this guy shows up.  Do you?