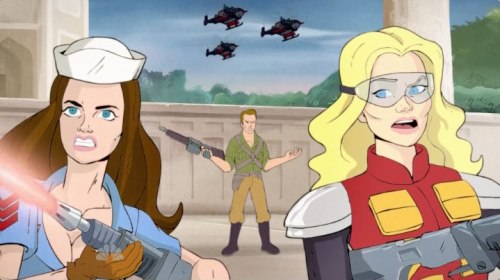 If I hadn’t seen any of this series, this special episode would have bounced off me like a lot of G.I. Joe satires (the unfunny Fox ADHD “Cobra’s March Madness Bracket” skit, for one) — they get some things right, some things wrong, and don’t stay with me.  But I’ve seen season 1 of Community, and love it, which helped set the stage for the bigger concept (Jeff Winger is in denial about the parts of his life he doesn’t like) as well as a bunch of smaller jokes (Abed’s codename as “Fourth Wall.”)  In a sentence, this was both a good parody of G.I. Joe as well as a great episode of Community.  That’s a hard balance to strike.

Some of that stems from how the two universes were melded together — again, Abed as “Fourth Wall” and Britta as “Buzzkill.”  If you know the show, those are hilarious jokes, and yet they fit in this altered G.I. Joe universe because they sound like standard two-syllable Joe codenames, and because each looks like a Joe or a Joe-might’ve-been.  Some of the balance also stems from how the episode looked and sounded like G.I. Joe.  Voice acting from Bill Ratner and Michael Bell, for one.  A strong approximation of the Russ Heath/American Adventure Style and color, saturation, and telecine of the original cartoon, but all done (presumably) very fast and on a tight budget.  A 1980s episode of G.I. Joe had months for writing, animation, and post-production.  I don’t know how long Starburns Media had to animate “G.I. Jeff.”  Actors voice recorded only three weeks ago, but there appear to have been placeholders, so animation may have been in progress well before that.  But either way, ajusted for inflation this could not have compared to a 1985 Sunbow budget.  But it looked great regardless. I’m conflicted on the roto, though.  Joe drawings we’ve seen before nods to the original cartoon.  This Real Ghostbusters swipe, though, is a tiny bit jarring.  But again, tight budget, tight schedule.

And then there were the live-action fake ads.  They looked great, and added another slice of humor beyond poking fun of the ’80s cartoon, yet managed to be integral to the story.  In fact, those ads were the best part of the show.  (And not just because I’m writing the chapter on the commercials in my book right now.)  They were the best part because the parody was funniest, and most spot-on to G.I. Joe.  Kids manipulating action figures in back yards, close-up photography of toys, that’s G.I. Joe. 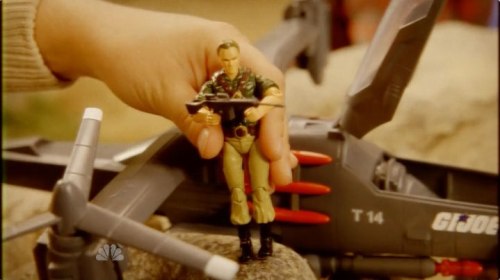 Duke’s first line about the Community cast standing accused of “violence, suggestive language, and mature situations,” that’s great.  That’s a comment on the G.I. Joe cartoon, and TV, and the ’80s.  As is the joke about “constant lip sync mistakes.”  But the visual gag of repeating animation (the hitting Cobra on the head with a rock), while funny, it’s not a G.I. Joe joke.  It’s a joke about cheap animation, which G.I. Joe did not have.  And G.I. Joe never repeated animation.  That joke is better served to Hanna-Barbera, or Ruby Spears.  (Think Fred Flintstone chasing Barney down an infinite hallway.)

Jokes about Cobra Commander loving Destro, not so much.  I’ve realized that I’ll probably never love any parody of G.I. Joe except one I write and draw (or direct).  I’m too close to it, and while I’m fine with making fun of Batman or Spider-Man, I’m protective of G.I. Joe.  That this parody was a loving one, and not cheap or exploitive, means much.  It’s why I can’t get into the Fensler Film PSAs.  Yes, they’re funny, I guess, but they’re not about G.I. Joe.  It’s all random funny words.  But this goes back to 1986 or so, and someone showing me the cover of Cracked magazine, with the “inside this issue” cover tag of “G.I. Joke,” and me frowning.  So don’t worry, I’m just not built for anyone poking fun at Real American Hero.

I don’t know we’ll ever again get a parody as loving, fun, and well-crafted as this, and we certainly won’t get a cartoon that looks and sounds as much as the ’80s one as this, so I’m happy that Dan Harmon and company picked G.I. Joe for this year’s oddball episode of Community.