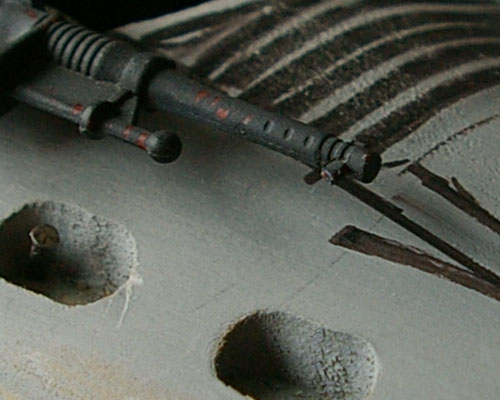 I often forget that half of the G.I. Joe line was vehicles.

It’s embedded in my sense of the brand, that in comics and on television and in our living rooms these characters pilot planes and drive tanks into battle. And that these vehicles have as much personality as the characters themselves. Some are hefty, others are lithe. Some are realistic, others are total fantasies. Some, like the 1990 Cobra Piranha, are aggressive, yet small and swift. Here’s a lovely shot taken by Chad Hucal for YoJoe.com of this boat as it appeared at retail: 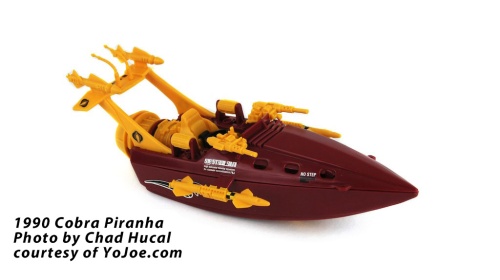 But someone made this vehicle. And it wasn’t one of the figure designers I more often refer to. A vehicle designer designed this, that it would fit a price point, and be a certain size, and in this case, be aquatic, and for the bad guys. David Kunitz was a Senior Designer and Project Manager at Hasbro between 1984 and 1995, and VP of Design for Boys Toys for a decade after that. While he worked on several toy brands, for purposes of this blog, he takes the title of “Vehicle Designer.” I’m a little embarassed that Kunitz has barely come up before here at A Real American Book!, since he was such a big part of G.I. Joe. But posting order here is random, I have more figural assets than vehicular ones, and some toy folk have been mentioned a lot, and others not much. (Kunitz is pictured here, fifth from left, with the baseball cap, from the 2017 HASCON write-up.)

Kunitz designed the Cobra Piranha, sketching it out and drawing schematics. He likely built this grey model, as for many years vehicle designers both created their tanks and planes and boats on paper and then also in three dimensions. But later in the span of Real American Hero, the division of labor changed a bit and the models were built by employees in the model shop, a separate office in Hasbro. (Engineers handled the final steps in either case.)

While this model was in the possession of pal Gary “Goggles” Head, about whom I’ve written here, I was able to snap three photos. 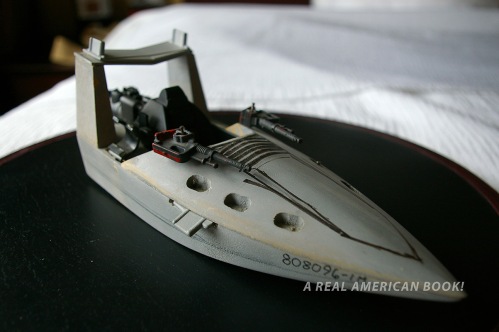 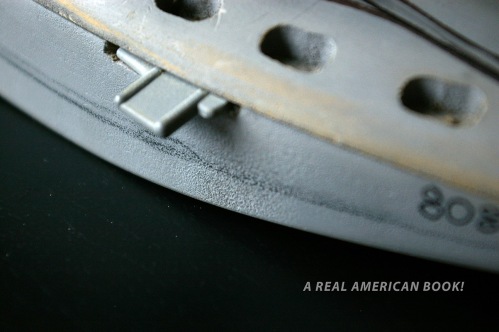 These grey models, made from wood and styrene, plus plastic repurposed bits from other toys, are three-dimensional sketches. (Sometimes a vehicle would get more than one, with more precision and detail added to a second model.) You can see some differences here between the model and the production toy, as the spoiler isn’t fully described, and the ridges on the front are drawn in with marker, rather than debossed.

My brother and I didn’t own the Piranha (or the Devilfish, for that matter!), and I have a loose mental list entitled Figure I Would Have Bought Next in a Given Year if I had Bought One Additional Figure That Year. And you won’t be surprised to learn that I have an analogous list for vehicles. The Piranha is about third on that list for 1990 (and the Devilfish is first on that list for ’86!). Cobra’s Piranha is a great little vehicle, although it loses out to the Devilfish because it can’t hold additional figures. But as the Joe and Cobra vehicles were getting a little more fantastical, it looked back to the more grounded ones of a few years prior.

What did you think of the Cobra Piranha?