Tony Salmons had a brief connection with G.I. Joe.

He penciled three [EDIT: four!] full issues (69, 87, 88, and 91 — just as Marshall Rogers was finishing his run and Mark Bright was starting his) as well as one [EDIT: actually two] covers (a post for another day). These issues were inked by Randy Emberlin, who was now the regular inker on the series, and would stick around for another few years. Emberlin added a soft sense of dimension to Salmons’ work, which was known for its stark power and heft that was augmented by a deft sense of design. No one in comics draws like Tony Salmons. He had the attention of Larry Hama, who had edited Salmons on the short-lived Dakota North. Hama saw the ingenuity of Salmon’s drawings and coached him on storytelling and page layout, and gave him bits of work where he could — we all think of Hama as the writer on G.I. Joe, but his day job was editor on Savage Tales and the Conan titles.

When Salmons inked himself, his art moved in other directions. He drew one additional G.I. Joe tale, a back-up story for Yearbook #4, cover dated February 1988, and this is all him. (I’d show you the cover, but it’s Mark Bright, not Salmons, and represents the main story in the book, not this back-up, so it doesn’t much connect to today’s post) This is an unusual story. It’s only 7 pages, the Joes barely appear, and they don’t appear in costume. If you didn’t know anything about toys and licensed comics, you could mistake this for any crime drama. Scarlett and Snake-Eyes are in civilian attire, and again, it’s not like they’re driving up to this convenience store in the AWE Striker. (Which Salmons did draw in issue #88.)

At the time, I didn’t love the art. It felt sparse. But in 1990, I didn’t like Mike Mignola’s work and didn’t understand the big deal about that Jack Kirby guy, just to pick two main examples to help you calibrate my sense of taste. Salmons drew weird, and a little ugly, but he also drew dynamicly and fearlessly. He’s often been called an artist’s artist, that us fans may like the work or not, but there’s much we can’t see, that professional artists look at this work and immediately see that it’s special. 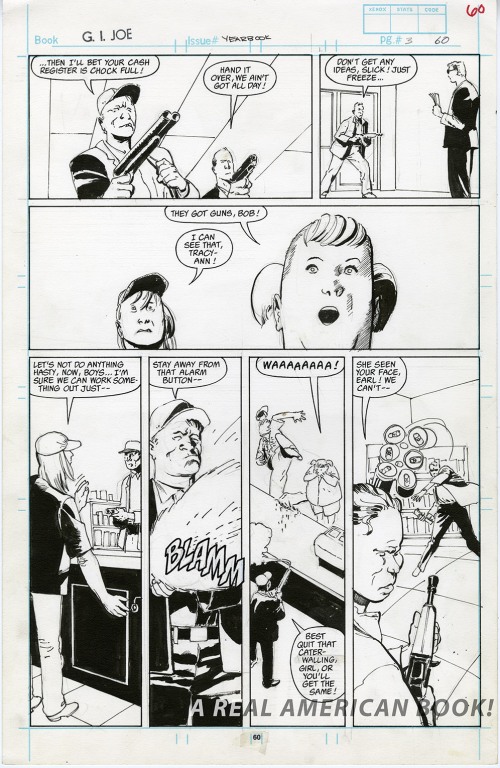 This is an odd page from an off-beat story. Even showing it here at ARealAmericanBook! feels like a little bit of a cheat. You want to see prime, juicy G.I. Joe art, and this isn’t a splash page or a cover, and it’s not in color, and it’s not all that loud. But there’s magic is seeing original art up close — without the filter of being shrunk and printed and colored. Salman’s lines are vital and raw, and yet thin and careful. Again, we barely see our marquee heroes. It’s also shocking in that an innocent bystander is quickly and cruelly killed. I was a tad upset by this at the time, and still am. But that’s the point of it.

Oh, the story ends on a tiny punchline.

Filed under Back issues, Comic Books, G.I. Joe Behind the Scenes