Cesspool started out pitched as a similarly eco-themed “Oil Baron.” I’m not sure if that was a codename (probably not) or a title, but the figure and his ilk evolved and we got Cesspool. Along the way, Cesspool dropped his earlier name, “The CEO,” and Eco-Warriors dropped its earlier monicker, “Eco-Force.” We met the Oil Baron here several years ago at A Real American Book!, in fact, another Kurt Groen drawing.

Groen was primary figure designer in 1990. Here’s a color copy of his presentation art for Cesspool. 1989 and 1990 were the transition years where Hasbro stopped hiring outside artists to paint fine art renderings of each character that made it to internal final approval — not package artwork that would be seen by the public — and it’s here that instead of seeing Dave Dorman, George Woodbridge, and Bart Sears paintings, we see Kurt Groen drawings. These are often blown-up photocopies of his final pencil studies, colored in with marker. (And this is a photocopy of the marker original.) Click to enlarge!

(Note the blade in the back of Cesspool’s boot under my watermark.) Groen drew Cesspool’s turnaround, his sculpt input drawing. This was handed off to a sculptor.

The blade is now a part of the boot, and not a hinged piece or a clip-on. These kinds of small details got absorbed and costed out all the time, often with sidearm holsters and grenades getting kind of mooshed into a figure’s torso or legs so that the piece would properly pop out of the mold in the factory during production. Any anyway, we lose the sense of these vertical details as blades and metal when they were painted black, the same color as Cesspool’s boots in the final figure, so they just become a decorative architectural structure for his boots. Instead of stompy boots, Cesspool gets really stompy boots. Here’s a tiny, crummy photo that you can’t enlarge:

Groen also drew breakdowns on Cesspool’s accessories, the backpack and the chainsaw.

I’m missing a photocopy here, as there would be one more drawing to show the inner pouch of the backpack (the squishy part where you push your thumb to make the water shoot), the hose, and the squirt gun. While I didn’t love the bright colors and oversimplification of a complex political and societal issue in the form of the Eco-Warriors (Cobra wants the pollute! Joes shoot their own anti-sludge to clean up the environment!), I liked Cesspool. His uniform feels appropriately regal and flamboyant as a leader in Cobra and business, his scar makes him a cartoon villain, and as a CEO, he offered much to the ongoing story of Cobra’s business ties with fictional companies like MARS or Extensive Enterprises, although these links weren’t explored. As a fad character, Cesspool’s days were likely numbered in the ongoing story of G.I. Joe from the start. 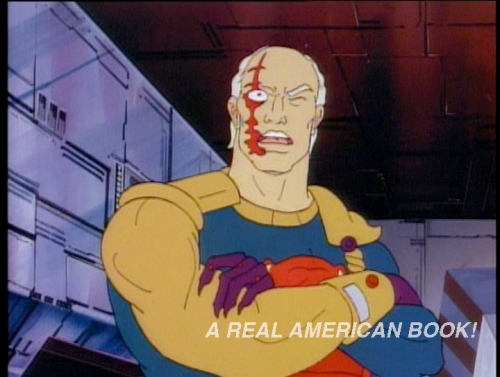 What do you think of Cesspool?