G.I. Joe fans are probably familiar with this guy:

END_OF_DOCUMENT_TOKEN_TO_BE_REPLACED 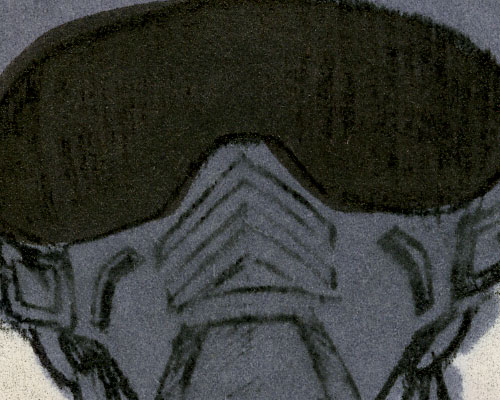 We all likely respond to Wild Weasel’s signature red flight suit. Depending on the light, it’s a little maroon, a little magenta. But overall, it’s red. Red, the color of blood, the color of rage, the color of evil, the color of the Red Baron’s plane. Much of what made Cobra stand out so much from G.I. Joe those first few years, 1982 – 1986 or so, was color: Joes were generally greens, browns, and tans. Cobra was generally blue, black, and red.

After figure designer Ron Rudat finalized each Joe or Cobra, he would color several — sometimes several dozen — photocopies of his final drawing, and with markers or ink, brainstorm a myriad of color schemes. You lose much of the effect if you see any one by itself, as the real revelation comes in seeing ten or fifteen laid out together, all the strange and wonderful possibilities that might have been.

But here’s a might-have-been for Wild Weasel.

I think he might have gotten lost against a dark blue plane had he arrived in this grey. But it’s neat nonetheless. (Perhaps these duds against a red plane!) In what colors have you wanted to see Wild Weasel?