Prose recollections of my life as a G.I. Joe fan continue next week.  In the meantime, to celebrate Jim Sorenson’s announcement about his book of G.I. Joe animation model sheets (I helped out a little bit), today’s post features the model sheets for the two boys in PSA #34:

Thanks again to YouTube user PSAGIJoe for uploading the original public service announcements.

I love this one for its mild message about nutrition, rather than the more severe topics of theft, vehicular injury, and death by asphyxiation, as well its catalog of animation mistakes:  the color pop on Lifeline’s backpack, the terrible animation of the trio biting and chewing, Lifeline’s ability to talk without chewing, the oddity of bumping into a special forces operative single-handedly juggling fruit while… waiting for us?  Also, that weird apple vending machine thing.

Is this just a poorly designed shelf?  Are those apples floating in zero G?  Is it a graphic of apples printed on the front surface of an apple vending machine?  It’s in no way important, but to me it strikes of the cultural divide between America and Japan (or Korea) crossed with an impending deadline.  I don’t have the storyboard for this PSA, but I’ll guess that the backgrounds weren’t fully fleshed out.  Photocopies went to the animators overseas, where retail stores are a little different, and some talented background painter whipped up this contraption:

Anyway, here’s Terrell Williams and “boy,” all ready for their close-ups. 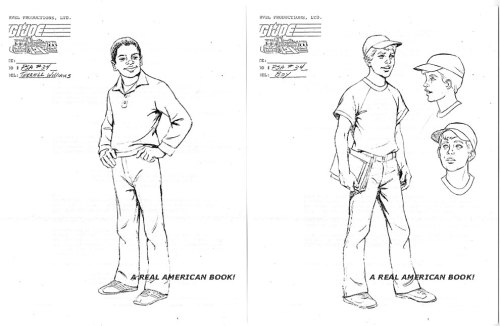 They’re unsigned, so I don’t know who drew them, but looking over the list of G.I. Joe model designers, I’d guess Carol Lundberg, John Koch, or William Draut.