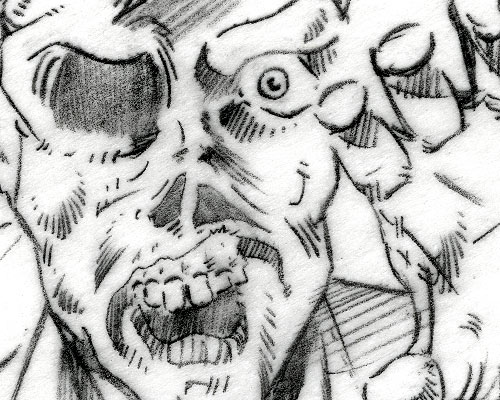 Hey, all.  Sorry for the delay.  End of school and store events.  But, hey, G.I. Joe!
END_OF_DOCUMENT_TOKEN_TO_BE_REPLACED 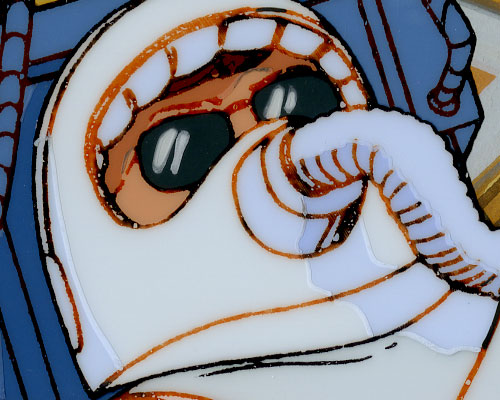 As much as I love G.I. Joe toys and comics, I was a fan of the animation first.  I went to school for animation, and teach it, and the Sunbow/Marvel G.I. Joe (along with Transformers) are my top shows.  Vivid color, strong animation, smart writing, superb sound design, stellar music, and top-notch voice acting bring me back to these two series again and again.  They’re charming.  And their strengths are such that I can blissfully ignore their many flaws, like the ease with which a squad of Joes flies into space in F-14 jets, or return via parachute.

But Flint Dille and Stanley Ralph Ross’ “The Wrong Stuff,” for all its silliness, is one of the series’ best episodes.  One day I’ll write a long post about it, but in a word, it’s funny.  So let’s celebrate that fun with an original production cel and background of Wild Bill in full astronaut regalia.  Click for larger: END_OF_DOCUMENT_TOKEN_TO_BE_REPLACED

Here’s an unproduced Cobra I don’t know anything about. END_OF_DOCUMENT_TOKEN_TO_BE_REPLACED 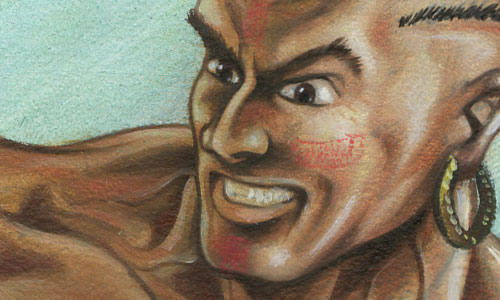 As previously mentioned here, in the mid-’80s freelance artist Dave Dorman painted fully rendered presentation pieces of characters already sketched out by figure designer Ron Rudat.  These were internal-only to Hasbro, and not intended as package art or for public consumption.  Even at this stage, a Joe or Cobra could still get nixed.  From 1986, here is an idea for a Dreadnok that didn’t make it further.  Note the misspelled name. END_OF_DOCUMENT_TOKEN_TO_BE_REPLACED 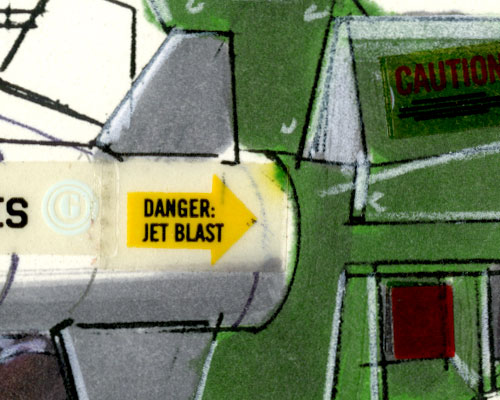 Sorry for the delay in posting.  School starts and trips accrue in September.  To get back into it and take a break from “The Rotten Egg” and my exciting internship today we’ve got Rich Rossi’s color rendering of a vehicle concept, the Towed Artillery Missile System, which I’ll call the TAMS for short.  In all honesty I don’t know anything about it, so we’ll play the reasonable assumption game. 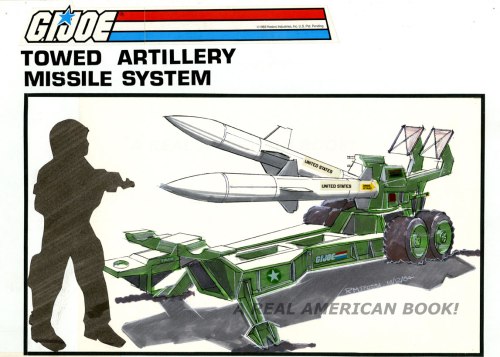 Drawn in ’84, it would have been pitched for ’86 or ’87.  But often concepts would get shot down, only to resurface later, or inspire a later idea.  In 1988 a different vehicle showed up, the similarly monikered RPV, or Remote Pilot Vehicle — boy did the names not flow for these two. 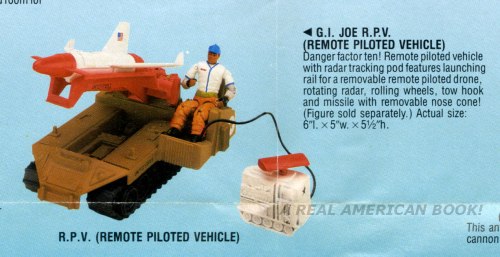 I don’t wish to draw a straight line between them, that one inspired the other, but it’s safe to say they both filled a specific price point, play pattern, and concept.  But notably the TAMS seats no driver and carries no figure, even by precarious foot peg.  And to further differentiate it from the RPV, by ’88 scale, detailing, and concepts were getting exaggerated and moving away from strict military realism.  The structure of the TAMS more resembles the detailing on earlier vehicles like the FLAK and the ASP, shown here. 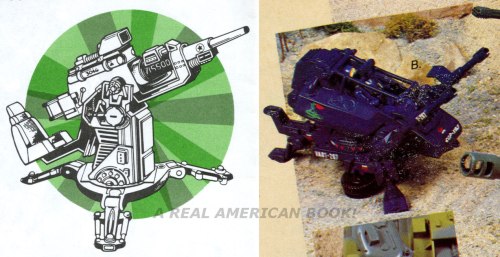 There’s a stronger sense of parts and bolts and hardware, whereas the late ’80s styling smoothed out edges and surfaces.  Since these catalog scans aren’t too enlightening, here are links to much nicer photos of each, from the fine folks at yojoe: the FLAK, the ASP, and the RPV.

One thing’s for sure — Real American Hero had no shortage of small artillery accessories.  These were great for populating a small-scale battlefield with variety, even if they weren’t as much fun as “regular” vehicles like Jeeps and tanks, or as story-driving as a headquarters playset. 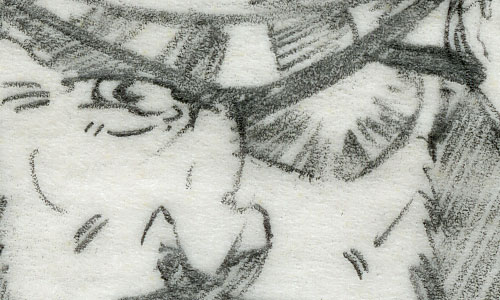 Before Cesspool became the lead villain for Cobra’s half of the 1991 Eco-Warriors subset, Kurt Groen pitched this unnamed character, a pirate oil baron. 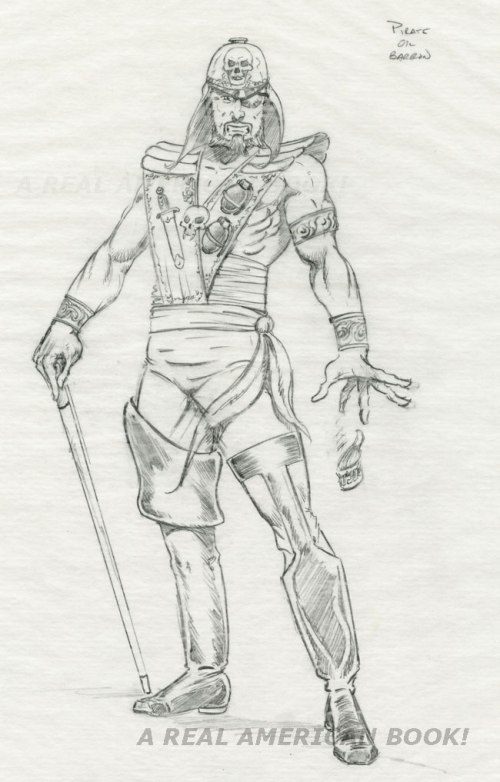 I’m not sure what he’s dropping, something with a Joe logo — a pouch?  Spirit’s ponytail?  Later, when Groen colored this, he added a backpack with an oil-shooting weapon, looking ahead to the water-squirting weapons that each Eco-Warrior came packaged with. 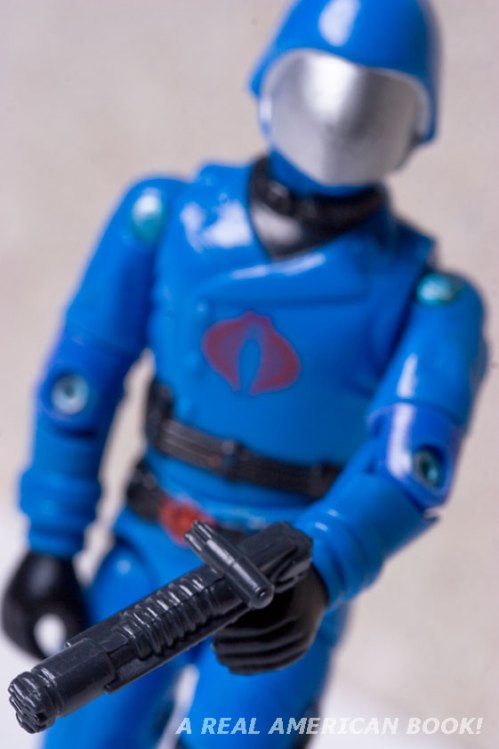 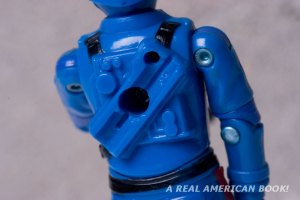 It came with his 1982 straight-arm figure, and the 1983 swivel-arm retool, and the 1984 mail-in hooded version of the character.  (Embarrassing trivia:  My brother and I never knew the gun fit into CC’s back!  I figured this out in 2008, meaning I should probably call off this whole book thing.) 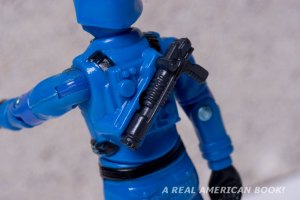 From 1981, here’s Greg Berndtson’s control art for the weapon in question.  This was drawn concurrently with Ron Rudat’s figure turnaround. 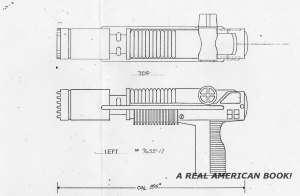 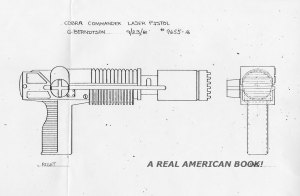 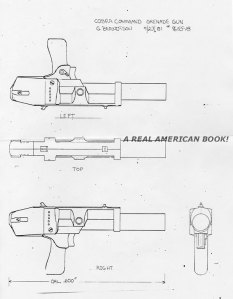 Know of any other designed-but-scrapped weapons?

Filed under Book Behind the Scenes, Photography, Toys and Toy Art

For every figure that made it into the line, dozens  were proposed as concepts and sketches.  Here’s a color marker comp (ink on a photocopy of pencil art) by Kurt Groen of an unproduced Cobra  soldier — likely some kind of Viper — from spring of  1990.  I’m not sure if this character made it into three dimensions, but I doubt it.  Click for a slightly larger image: 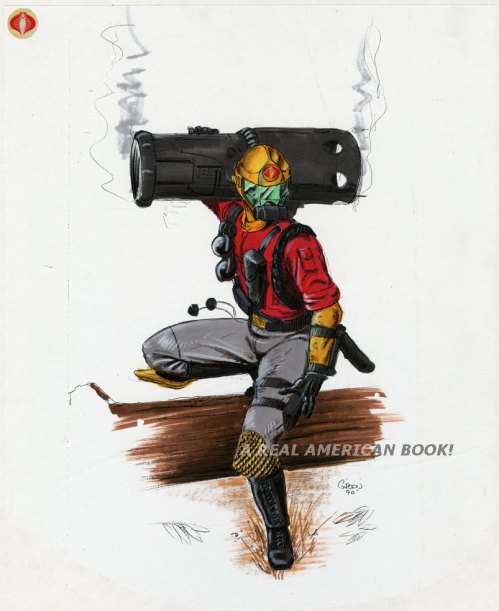 Subtly refining the art and adding a touch of detail, Groen redrew this as a finished color presentation “painting,” but by the time he was involved with the brand the toy development process dictated the internal presentation paintings no longer be painted.  The final art, not pictured, looks just about the same as the rough, above.

Presumably this character was initially pitched for the 1992 product line.