Charbroil by Woodbridge and Sears 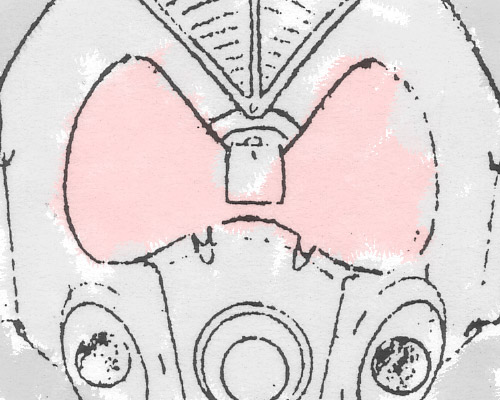 Charbroil was never a favorite of mine. His brown and yellow color scheme didn’t grab me, the shape of his chest plate looked like science fiction, and his helmet design made him look like a Cobra agent. Plus I was already attached to Blowtorch, the 1983 flamethrower recruit and the first G.I. Joe action figure I ever bought, and so the Joe team now had its second flamethrower. The fact that he was redundant didn’t make or break the purchase, but all the other strikes against him did, so I passed. (A year later I acquired the Night Force repaint of Charbroil in grey and blue, an improvement, but still not a vital part of my line-up.)

Here’s a wonderful photo of the 1988 Charbroil figure by Terry Dizard, courtesy of YoJoe.com.

George Woodbridge, that wonderful artist of military history books and contributor to Mad Magazine, drew this turnaround, as he did for much of the 1988 G.I. Joe line. Click to enlarge.

Bart Sears, about to leave G.I. Joe behind in order to focus on C.O.P.S., designed supplemental pieces, like Charbroil’s helmet and flamethrower weapon. 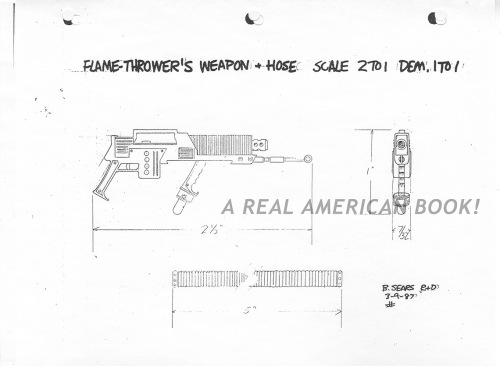 Of particular interest is the backpack.

Around 1986, ’87, and ’88, Hasbro was experimenting with lenticular printing on a few stickers (the B.A.T. chest plate and Lightfoot’s tiny robot), and one arrived on Charbroil’s backpack as well. Such objects feature a kind of animation, where an image shows movement across a few frames (like a flipbook with only three or four pictures) or in this case, a simulated 3-D imagery. As you wiggle the backpack back and forth, there’s depth to those yellow pipes, canisters, and circuits over that black void. They seem to slide a little to the left or right in parallax, as if they were real bits deeper inside that backpack.

It’s worth remembering that in toymaking, nothing is left unaddressed. Copywriters pour over every word on the packaging, sculptors and engineers measure every curve and angle, and designers delineate every detail. So yes, Bart Sears drew out the design for the lenticular sticker of Charbroil’s backpack.

END_OF_DOCUMENT_TOKEN_TO_BE_REPLACED

Having a ninja commando on the team was just the start.  In 1988, G.I. Joe got a real-life samurai in the form of Budo.  Here’s his action figure sculpt input sheet.

Figure art, above, by George Woodbridge.  Accessory art, below, by Mark Pennington. 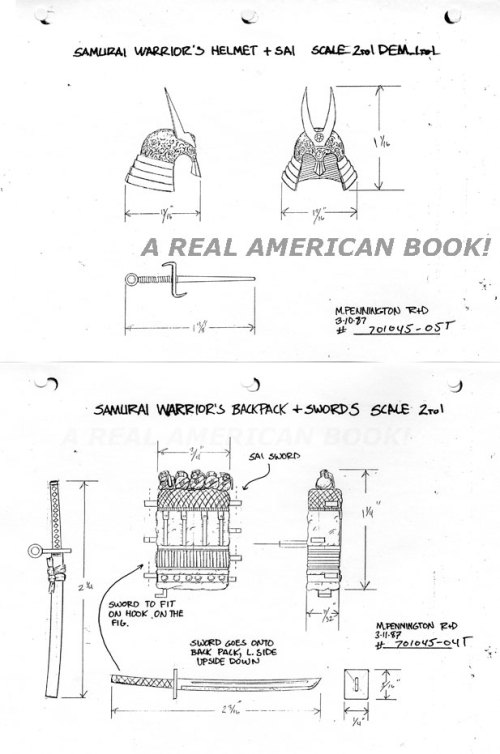 Behind the scenes of G.I. Joe – Hydro-Viper

Today’s art post is the complete sculpt input (i.e. “turnaround”) for the 1988 Hydro-Viper.  Again for casual or non-fans, let’s start with a photo (by me, not my fancy book photographer) of the production figure for a baseline comparison. 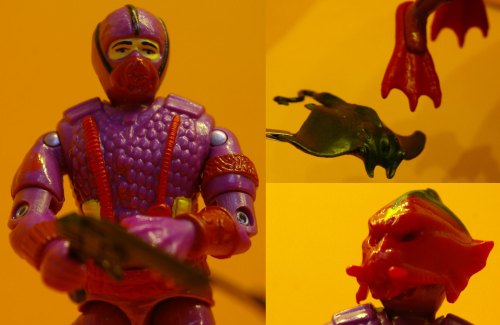 Here’s George Woodbridge’s turnaround.  Such a crisp and clean line, and a deft spotting of blacks.

Note that the figure is referred to as “Cobra Frogman,” so “Hydro-Viper” hadn’t yet cleared Legal.

Woodbridge’s association with G.I. Joe is limited. He drew most of the ’88 inputs, and did many of the Hasbro-internal figure presentation paintings that Dave Dorman and Bart Sears didn’t around 1988.  Writer Mark Evanier wrote a short biography of Woodbridge in 2004 when the artist passed away.  You can find it here, but if you want a shorter version, I’ll just throw out the terms “Mad Magazine” and “military and historical illustration.”  In the near future I’ll show a few more pieces like this here, and in the not-near future I’ll have Woodbridge’s Crazylegs (a Joe paratrooper) color piece in my book.

Here are three sheets of the Hydro-Viper’s accessories, drawn by Bart Sears.  In toys, Sears is known for designing Hasbro’s C.O.P.S.  In comics, Sears drew Justice League Europe and has recently penciled some Conan and Indiana Jones for Dark Horse.  Of note here is the ray, the most bizarre of all animals that any G.I. Joe figure came packaged with.

Behind the scenes of G.I. Joe – Heath Snake-Eyes

Today’s art peak brings you several photocopies of Russ Heath’s model sheets for the 1985 season of the animated G.I. Joe.  While the Snake-Eyes action figure was iconically all black, the TV series had previously shown him in dark blue.  (All black doesn’t “read” well in animation.)  For 1985, SE went dark grey, which to my eye reads better than the dark blue and works better as a stand-in for black since dark blue is already associated with Cobra.  Russ Heath’s front view:

Clearly based, as many of his drawings were, on Hasbro’s internal presentation artwork:

This one, a black and white photocopy, doesn’t have a signature, and I’ll admit I don’t know who painted it.  To my eye it’s not Ron Rudat — the proportions and clothing folds don’t match with work that I know is Rudat.  The anatomy is tight, which says George Woodbridge, but his Joe work was colored and black ink, not rendered paintings.  Maybe one of you eagle eyed Joe collectors can correct me in the comments.  There is a slightly better reproduction of this image, still a black and white photocopy of a color photocopy, though, in Vincent Santelmo’s Official 30th Anniversary Salute to G.I. Joe.

And SE’s undercover disguise, drawn by Bruce Timm, from the beginning of “Battle for the Train of Gold.”  To give you a sense of the timeline, this was drawn in August 1984, and the episode aired 14  months later.

And what appears to be an unused alternate from same.

I’m not sure where in the storyline of “Train” there would have been an opportunity for SE to wear this, but there is a horse farm in act 3, so who knows?